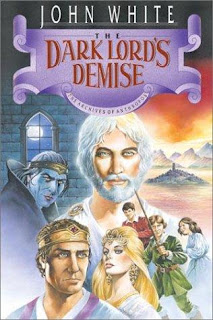 One person I have great respect for is Dr. John White. He was a man of compassion and wisdom--a psychiatrist who preached most Sundays at the church I attended in the 1970s. His spiritual journey was one that has greatly inspired me.
A prolific writer, at the request of his children, he wrote a series of fantasy novels unabashedly mimicking "The Chronicles of Narnia" called "The Archives of Anthropos." The stories begin in Winnipeg but the children are transported to another world, Anthropos, where they have a variety of experiences with spiritual insight for the reader. I think my favourite is Quest for the King because of the accurate and helpful description of spiritual warfare.
Dr. White was working on a final book for the series before his death. Friends of his generously took on the project of finishing The Dark Lord's Demise on his behalf. I'm disappointed. It wasn't as meaty as Quest for the King. I saw a theme about the dangers of some New Age spiritual ideas develop part way through the book that wasn't brought to a satisfactory conclusion. Even though it's a book for children, there could have been more depth and a more thorough examination of some of the questions raised. Betty's character, for instance, wasn't adequately developed and her movement from the side of Lord Lunacy (Satan) to that of Gaal (Jesus) didn't adequately show the struggle it must have been for her. The transition was too flat.
Still, the story asks some good questions. Who is Jesus? What is the difference between believing that he is always present and believing that he is in all things and in fact is all things? What does believing in Jesus actually mean? Is it sufficient to believe that he exists or is something else needed?
Despite my disappointment in this final book of the series, I highly recommend the series to you, especially Quest for the King.