Attacked but Determined to Stay

July 14, 2008
B.C. missionary attacked in Kenya
Retired, they left Canada to reach out to the poor in Kenya--planting and caring 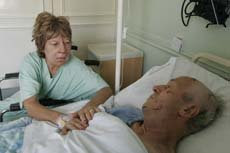 for gardens to feed the orphans and doing what Jesus would do. After only four months there, John was attacked when he stepped out of his home--beaten with clubs, severely cut with machetes and then left in the bushes for dead. The men (seven have been arrested) then went inside, spending the next 45 minutes beating, cutting and raping Eloise who had been having a bath. Once the attackers left, Eloise went looking for her husband, found him, dragged him into their 4 x 4, both bleeding profusely and drove to the mission compound, ramming two different gates to get to safety.
John had "...multiple fractures to the head, jaw and skull ... broken bones in his arms, knees and legs" and required three hours of surgery; both had deep cuts. Yet they say "We want to stay because we know that this is where we're supposed to be. God told us to come here, and we feel like we're on an assignment here to help the orphans."*
Wow! Would I return to a place where I had been so badly assaulted? Would I be convinced God wanted me to continue my work? I don't know. For sure it can only be by the grace and power of God that one could even contemplate such a thing. Jesus said, "My command is this: Love each other as I have loved you. Greater love has no one than this, that he lay down his life for his friends." (John 15:12, 13 NIV) Can I love like this? Can you?