When Sanballat heard that we were rebuilding the wall, he became angry and was greatly incensed. He ridiculed the Jews and...said, ‘What are those feeble Jews doing? Will they restore their wall? ... Can they bring the stones back to life from those heaps of rubble...?’ So we rebuilt the wall...for the people worked with all their heart. Nehemiah 4:1, 2, 6 NIV

Nehemiah was cupbearer to Artaxerxes, king of Persia. Some of God’s people had returned to their homeland from a captivity begun by Nebuchadnezzer but a report reached Nehemiah that the 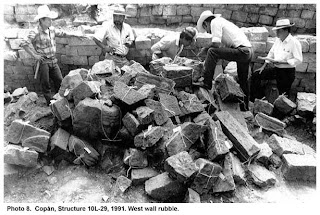 walls and gates of Jerusalem were still broken and destroyed. This news upset Nehemiah so much that the king noticed his unhappiness, asked about it and then sent him to Judah as governor, instructing him to rebuild the wall. Once this task had begun, a group of local men protested loudly and caused all sorts of difficulties for God’s people. Nehemiah didn’t let their opposition stop him. Instead he continued the task.

Using Colossians 3:5, “Put to death, therefore, whatever belongs to your earthly nature: sexual immorality, impurity, lust, evil desires and greed, which is idolatry,” (NIV) Chambers suggests that we destroy these evils in our lives not by praying about them but by neglecting them. In fact he says, “It is absurd to say, Pray about them; when once a thing is seen to be wrong, don’t pray about it, it fixes the mind on it; never for a second brood on it, destroy it by neglect.”* Part of this makes sense to me. I discovered in my struggle against same-sex attraction that my focus needed to be on building relationship with God much more than trying to fix what was wrong in my life. It is as we focus our attention wholly on God that he makes the changes that are needed in our lives. But to not pray about the problem? To not ask God to remove the wickedness from us, whatever it may be? Is this right? I do agree with Chambers, however, when he says, “We cannot destroy sin by neglect; God deals with sin....” Yes! It is all God’s doing. Perhaps my difficulty with Chambers on these thoughts is a matter of semantics, but for me, the questions remain.

Sacrifice
Jesus told his disciples, “If your right eye causes you to sin, gouge it out and throw it away. It is better for you to lose one part of your body than for your whole body to be thrown into hell.” (Matthew 5:29 NIV) Chambers uses this to argue that, as Christians, we are not only to give up that which is wrong but also to give up the good that isn’t good enough. He asks, “Anyone will give up wrong things if he knows how to, but will I give up the best I have for Jesus Christ?” It’s a sobering question. What am I willing to relinquish in my pursuit of God?

But again I have trouble with one of his statements in regards to this: “Sanctification means not only that we are delivered from sin, but that we start on a life of stern discipline. It is not a question of praying but of performing, of deliberately disciplining ourselves.” Stern discipline? Performance and discipline more important than praying? Does this not reduce the work of God if sanctification is dependent not on prayer but on performance and discipline?

Desire
“Delight yourself in the Lord and he will give you the desires of your heart.” (Psalm 37:4 NIV) “If you remain in me and my words remain in you, ask whatever you wish, and it will be given you.” (John 15:7 NIV)

Chambers defines desire as being “what you determine in your mind and settle in your heart and set yourself towards as good....” He adds that “...that is the thing God will fulfil if you delight in Him—that is the condition.” At camp this week we had a discussion about this promise. Does God really give us whatever we ask? Whatever we desire? It may be obvious to us that it is not God’s will for us to live in palatial homes with servants (at least here on earth) but what about when we pray for someone’s healing? Could praying for such a thing be outside of God’s will? Would we know that it is if we “remain in [Christ] and [his] words remain in [us]?”

Chambers writes, “The majority of us only believe in Jesus Christ as far as we can see by our own wits.” So true! It is very easy to trust Jesus when I can understand something he says or does but what is my response when what he says or does makes no sense to me? Do I follow and obey anyway? Or do I argue, fuss and resist? I know I’ve done my share of kicking, screaming and loudly protesting. When I do, am I truly believing? “If we really believed Him...we would trust His Mind instead of our own....” This, I believe, is the crux of being disciples of Jesus, of “constructing” our spiritual lives. We must trust the mind of Christ instead of our own.

God, sometimes I’m not so good at trusting you. I make decisions based on my mind instead of on yours. But I want to be wholly yours—not mine, not someone else’s but yours. Please give me the faith I need, to be and do all you want of me.

*All non-Biblical quotes are from "Spiritual Construction--I" in "Biblical Ethics" in The Complete Works of Oswald Chambers, pages 104 and 105.

Samantha said…
Thank you for your blog. I am in similar circumstances--married, same-gender attracted, with three teenagers. My blog focuses on my journey as I try to come to terms with an abusive past, but it's always good to encounter people who are in happy mixed-orientation marriages, as we are relatively rare.

I appreciate your thoughts and will add one of my own. Yielding one's sexuality to God is difficult, to say the least. But as I remain committed to Him and to my husband, the rewards are amazing, the blessings innumerable, and the joy cannot be contained--it permeates all aspects of my life.

You wrote, "...as I remain committed to Him and to my husband, the rewards are amazing, the blessings innumerable, and the joy cannot be contained--it permeates all aspects of my life."

Yes! This is so true. I have no regrets about choosing God's way over my own though it was one of the most difficult things I've had to do. God is worth everything we give up for him and exceedingly more. God is good and I am so grateful for his place and his work in my life.