December 05, 2008
The following list is not complete, because I only started to keep track in June, rather than January. The list is longer than that for non-fiction because I can read fiction so much faster. 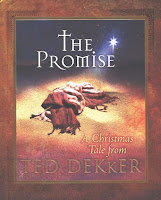 Salem Falls by Jodi Picoult
The Tenth Circle by Jodi Picoult
I'm disappointed that some of Picoult's books are steamier than I prefer. I figured that since Plain Truth wasn't steamy, neither would the others be. She's a very good writer though.

My thoughts on The Tenth Circle.

The Promise by Ted Dekker
A very dear friend gave this to me for Christmas.

Added December 5, 2008:
Playing for Pizza by John Grisham
Though the story is full of football, which I don't really understand, I loved learning about Parma, Italy. Interestingly, I had just finished reading the book when Mons received a package from a Parmesan friend he met this spring on his trip to some of Mediterranean countries.

Plain Truth by Jodi Picoult
A newborn baby is found dead in an Amish milking barn. I love reading stories that show the Amish way of life and this fast-paced murder mystery was no exception.

The Shack: Where Tragedy Confronts Eternity by William P. Young
In novel format, The Shack gives an incredibly wonderful view of what relationship with God can be like.

The Cellist of Sarajevo by Steven Galloway
Very artistic in style, this book doesn't have the most intriguing story line. It does, however, open the eyes of the reader to what it is like to live in a city in the centre of war.

Passchendaele: In WWI, a Small Band of Canadian Soldiers Challenged an Enormous German Army. This is Their Story based on the Screenplay by Paul Gross
This is an amazing and graphic depiction of what war is like--both on the front line and back at home. The battle at Passchendaele, apparently, changed Canada in many ways.

The Bourne Betrayal by Eric van Lustbader
Not written as well as the books in this series started by Robert Ludlum.


Added in August, 2008:
The Bourne Ultimatum--Robert Ludlum
The Bourne Supremacy--Robert Ludlum
The Bourne Identity--Robert Ludlum
My husband and sons convinced me one evening to watch a movie with them—The Bourne Identity. I loved it! (Okay, so I like stories of espionage and covert operations.) Imagine my surprise when I discovered I had the book, unread, on a shelf in my bedroom! The book is nearly a different story from the movie and much better. I ordered the next two from the library. The second book is set in Hong Kong—a place where I spent a couple of summers, so I recognized many of the places and the culture. I found Ludlum’s books clean of gratuitous sex and foul language, focusing on a theme of justice and rightness. Another author has continued the series and I hope to read his stories as well. Can he do as well as Ludlum? I doubt it but they could be fun to read anyway.

Dead Heat--Joel C. Roseberg
The Copper Scroll--Joel C. Rosenberg
The Ezekiel Option--Joel C. Rosenberg
The Last Days--Joel C. Rosenberg
The Last Jihad--Joel C. Rosenberg
I heard about this series from an online friend who works in a New Jersey Christian bookstore. Like the Left Behind series, these focus on end time events. Unlike LeHaye’s best-sellers, Rosenberg’s stories have a striking believability about them. Perhaps it’s because the author “has worked for some of the world’s most influential and provocative leaders, including Steve Forbes, former Israeli prime minister Benjamin Netanyahu, and former Israeli deputy prime minister Natan Sharansky,” and has spent much time in the company of other high-rolling politicians and their advisors. What is most amazing is that the very events he described in his first book (terrorists flying a jet into an American city on a suicide mission) took place after the book was written. This happened with the second and third books as well. Some have called him a modern-day Nostradamus but he protests that he simply looks at current events through the lens of Scripture, which makes plain what is to happen “in the last days.” For the first time in over thirty years, I’m interested in studying end-time events and what the connection is between them and what has been and is happening in the Middle East.

Byzantium--Stephen Lawhead
The improbable story of high adventure and endless action set in the 8th century, touching Ireland, Denmark, Russia, Constantinople and beyond. Vikings sail to Constantinople, looking for treasure beyond measure but can they find it? Can they utilize the “grab and dash” method so successful along the European coast? Can the young scholarly Irish monk captured by them keep himself useful enough to stay alive? How do these men from the wild north respond to civilization and Christianity as they pursue their goal of plundering a city covered in gold?

My Soul to Keep--Davis Bunn

The Voice--Bill Myers
What if scientists could record the voice of God spoken in the heavens? What would it look like? What would happen if that recording was played for others to hear?

Blink--Ted Dekker
A high-speed thriller that gives interesting insights into the Middle East with some sci-fi thrown in.

White--Ted Dekker
Red--Ted Dekker
Black--Ted Dekker
Dekker writes in a number of styles—Fantasy, Science Fiction, Thrillers. Black, Red and White move between our world and another, each world affecting the other. Dekker’s books are not overtly Christian in the sense that you’d hardly know they were until near the end when you’re left with some heavy thoughts to ponder: “What is faith?” “What if Jesus presented himself to us and we thought he was the enemy instead of our Saviour?” “How powerful are words?” “Where is the line between good and evil?” A friend asked me which books to start with if she wants to read Dekker. Some of his books can stand alone, such as Obsessed and Blink but many are connected in one way or another to the Circle Trilogy: Black, Red, White, so I'd start with them.

The Visitation--Frank Peretti
Peretti is always good. The Visitation is no exception. Read my comments about it here.

O Rugged Land of Gold--Martha Martin
A pregnant woman must make it through the winter alone on a deserted Alaskan mountainside where her husband found gold. An amazing story of courage and tenacity.

Chicago Healer--Paul H. Boge
The book isn't well written but has such a compelling story that I read it for the third time this year. Chicago Healer gives one Canadian writer's version of what it might look like if the power of the stories in the Book of Acts was available today.