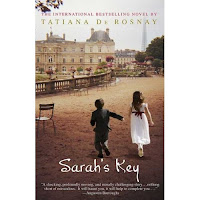 Sarah's Key by Tatiana de Rosnay
Ten-year-old Sarah's family is wakened in the early morning by the French police rounding up Jews on behalf of the Nazi occupiers. Thinking they'll be gone only a few hours, she manages to hide her four-year-old brother in a hidden, locked cupboard with promises that she'll return soon. Continue Reading.


The Secret Life of Bees by Sue Monk Kidd

I have always enjoyed the writings of Sue Monk Kidd, so when I saw Secret Life of Bees on the shelf, I was eager to add it to my collection of books to read. I first discovered Sue Monk Kidd in the Guidepost magazines we used to subscribe to and came to highly respect her after reading When the Heart Waits. She’s an excellent writer and I began crying on the first few pages of Bees, continuing as I read it non-stop in one afternoon. Continue Reading.

February 12, 2009
House: The Only Way Out Is In by Frank Peretti and Ted Dekker

novels that make me think. House is one such book. Two couples become stranded at night on a back road in Arkansas. The inn in which they take refuge turns into a house that seems alive as it changes its inner configuration at will. Consider the following quotes and the questions they aroused in me: Continued

Imagination:
Of the books I bought last weekend, I said Saint would be the first I would read and it was. I finished it yesterday. What an incredible story! I want more. Thankfully, there are sequels.

Carl has lost all identity except what has been fed to him through the manipulation of drugs, torture and the intensive demands of two people who hold his life in his hands. He's being trained to be an assassin--the best in the world. If he succeeds, he lives. If he fails, he dies. He cannot fail. Continued

Love:
Another topic that hit me in this book is the connection of worthlessness to the ability to give or receive love. I see myself being described here: Continued

February 8, 2009
New Books
I have a hard time resisting good books and I just finished spending an entire weekend promoting my own book in YWAM's bookstore at Missionfest in Manitoba. The cool thing about books for sale at Missionfest is that they are books often not available in regular Christian bookstores so this is a good opportunity to stock up on books with a missions theme. While that's true, YWAM has more than just books on missions so I got a varied selection. Continued

Give me a book of fiction and it's hard to pull me away from it. I read Mercy yesterday, from start to finish. I didn't have to stay up much past midnight to do it either, even though I didn't begin till the afternoon.... Continued