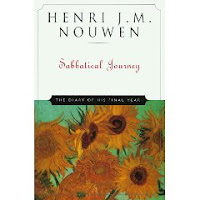 While Tom and I were on vacation, I finished reading Henri Nouwen’s posthumously-written book, Sabbatical Journey: The Diary of his Final Year. I very much enjoy his writing so it was a pleasure to see closer inside the man.

One thing that surprised me was the amount of travelling he did in the span of one year and I wonder how he afforded it. I thought Catholic priests took vows of poverty. Did the church pay for his trips? Was he allowed to keep the income from his writing and he used that? He was constantly flying—twice to Holland, several times back to Toronto where his Daybreak community was, across the continent to visit a friend, to another state to marry friends, trips to speak with his editors, publisher and people who had the wherewithal to give him guidance in one form or another.

I don’t agree with all his theology. Several times he mentions praying to a particular saint, for example, and even to a recently deceased friend, and that bothers me, but I choose to focus on what we believe in common.

He had a habit of celebrating the Eucharist every single day. During the year of this journal, he was staying in various places that offered him seclusion and silence and yet, when possible, he chose to celebrate the Eucharist with others. It was more than simply taking the bread and wine. It seems there are specific Bible passages to read for each day—probably one from the Old Testament, one from the Psalms, one from the Gospels and one from the Epistles—so these would be read aloud with the group and often he had a homily, though my guess is that it was usually unprepared. At times, there were fifty people gathering for these mini-services in a garage, a home, a barn, and the people developed community with each other in a way they hadn’t before. I wonder if they continued to meet once Nouwen had moved on.

Part of what I enjoyed about the book is that Nouwen was a writer who was continually having problems with finding the time to write amidst all the other things he did—the daily Eucharist, his frequent travels, his frequent guests, the phone, letters and so on. He had an active social life for one who was taking a year off to write, and had difficulty juggling the two. Toward the end of his sabbatical, he questions:

“Is this my vocation or is it better to stay home and write more? Is it good to be constantly surrounded by so many people and involved with their lives? Yes, it is pastoral care and true ministry, and I have a gift for it and love it. But it is very hard to do it and at the same time to be able to develop new, nurturing ideas, and to write them.” (p. 219)

He had a number of book projects on the go at once. He was translating one of his books into his mother tongue of Dutch; preparing to write about the Rodleigh family of trapeze artists; about Adam, the disabled man at L’arche Daybreak for whom he cared, the journal of his time in Winnipeg and a book called Can You Drink this Cup?

The Winnipeg journal in particular intrigued me—partly because Winnipeg is my home and partly because of the reason for the journal and why he was in Winnipeg. He had developed a close and dependent relationship with a friend he had met in France who became part of his Daybreak community. Most unexpectedly, seven years previously, the friend cut off all interaction, effectively ending the friendship, which caused Nouwen to spiral down in pain and depression to the point that he could not function and had to leave Daybreak for six months. It was a time of emotional fragility and spiritual therapy.

I wonder why he chose Winnipeg. I wonder if the journal was ever edited and published. This part of his story is so like part of mine that I want to know more about it. What captures my attention is that Nouwen was a world-renown scholar and writer, former professor of Yale—a university of no mean reputation. If he, a priest and scholar, fell into an emotional dependency then I am not alone. Nor am I less of a person because of it. I can see that for Nouwen. Why is it so hard to see about myself?

I like Nouwen because he is a thinker who poses questions for me to ponder:
Two thoughts I take away from this book are:

“Be sure that you love the life you’re living now, your studies, your prayers, your friendships.... Then you can trust that God will reveal to you the direction to go when the time comes. But don’t try to know now what you only have to know a few years from now.” (p. 38)

“...love finally means daring to be vulnerable to each other and offering each other a sense of home and safety in a very competitive world.” (p.183)

This last is a scary thought and yet so true. God grant me the daring to be vulnerable!

Return to Non-Fiction Books Read in 2009