What would this statement have meant to John's listeners? What would have come to their minds as they considered baptism with water? with the Holy Spirit and fire?
The Archaelogical Study Bible that I read has a short article entitled "Baptism in the Ancient World." It connects the idea of baptism to some of the temple rituals given by God through Moses to his people at Mt. Sinai. Water was an integral part of much that the people of Israel had to do in order to remain holy, a people separated from others. So many things made them "unclean" and therefore unfit to go to the tabernacle or temple or celebrate feasts like Passover.
When someone became "unclean" (having sex, women having their period, touching something dead other than an offering, etc.) they used water as part of the ritual to become clean again.
The "sea" that Solomon built for purification rites outside the sanctuary door of the temple was 11,500 gallons, the size of a backyard swimming pool (see first photo)! There were also ten basins on stands, each holding 250 gallons--enough water in each for a large kiddie's wading pool (as demonstrated in the second photo). 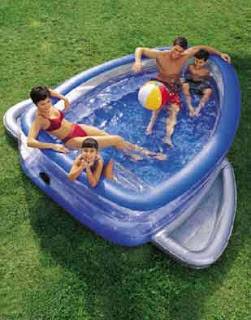 That's a lot of water! Presumably the priests would get right inside the "sea" to wash before entering the sanctuary of the temple. Otherwise, why have it so large?

A number of Jewish ritual baths, or miqvaot (singular miqveh**), have been excavated in Jerusalem, Jericho and elsewhere. By rabbinical law these had to hold at least 60 gallons (227 l) of water and be deep enough to completely immerse the body. 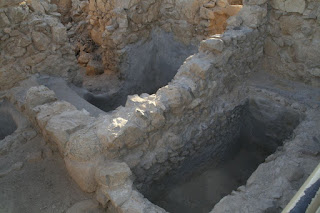 Therefore, it seems to me that in John the Baptist's day, baptism by water would be seen as a spiritual cleansing from all that separated them from interacting with God. It wasn't a one-time thing but something done as often as needed to ritually cleanse one's self from impurity.
What would they have understood, then, when John mentioned baptism in or by the Spirit and fire? Did they imagine themselves moving through a bonfire? Did it raise a spectre of times past when the people of Israel followed the pagan customs and "passed" their children through the fire? Did they assume it would kill and destroy them?
What was their view of the Spirit? I'm no scholar and the answer to this question seems a little more difficult to ascertain. In John 1:33b, the Baptist quotes what was told to him: "The man on whom you see the Spirit come down and remain is he who will baptize with the Holy Spirit." Who or what did they understand the Spirit to be?
The word "ruwach" used 375 in the NASB Old Testament can be translated in many ways, according to the one Hebrew lexicon I checked. Specifically, when referring to the Holy Spirit (because it doesn't always), the following apply:

Spirit of God, the third person of the triune God, the Holy Spirit, coequal, coeternal with the Father and the Son:

Two of these grab me. I think of the Shekinah glory that led the Children of Israel through the wilderness, that shone over the ark of the covenant and that made Moses' face so brilliant he had to wear a veil for the sake of the people around him. Is this what would happen to those baptised by the Spirit? (Remember, I'm trying to think from a first-century, pre-Pentecost Jewish viewpoint.)
I think about King Saul who was overcome by the Holy Spirit so that he was uttering prophecies along with the prophets. This happened numerous times in the Old Testament to more than just King Saul. Did they imagine that those baptised in the Holy Spirit would tear off their clothes and run around like madmen speaking out whatever God told them?
Perhaps there's a third possibility. Since the people held John the Baptist in high esteem and even wondered if he was the Messiah, it would seem natural for those listening to him that day about the one who would baptise with the Holy Spirit and with fire to think (correctly) that John was describing the Messiah. They expected the Messiah to be a warrior, so did they think that baptism in the Holy Spirit would impart "warlike energy and executive and administrative power"?
As I consider each possibility, the last seems most probable because it fits their expectations. The Messiah would impart this special power to the ones he chose and then lead all those so empowered to overcome the Romans and establish a free and eternal kingdom in Palestine. [Please remember that I'm simply puzzling this through as a non-scholar without any help except what's been noted here. I could be way off track.]

Could they have understood this to mean, "I'm facilitating personal spiritual purity but soon there will be one who will help cleanse the entire nation and country, not just the people in it"? I think they might have. Obviously, that's not what was meant at all and it's not what happened, either.
How do the two kinds of baptism relate to each other now? In that day, baptism with/in water meant immersing the whole body--like having a bath without the soap or going for a swim (did the priests in Solomon's day and beyond goof around in the water of the "sea" when theywent in it?). Water is physical but the Spirit is not. Baptism in the Holy Spirit: could it be that, as water temporarily washed away spiritual uncleanness, immersion in the Spirit would permanently destroy the spiritual uncleanness of those so baptised? I don't know. It's something I need to ponder more. What are your thoughts?
*"Baptism in the Ancient World." NIV Archaelogical Study Bible (Zondervan) p.1562.
Large pool: Dimensions: 12 feet by 33 feet / Capacity: 11,500 gallons / Depth: 3 feet, 6 inches to 5 feet http://www.aquamagazine.com/aquachoice/project.aspx?id=654
Small pool: 10'x 6', sides are 2' high http://www.beststuff.com/images/articles/062301a2.jpg
Mikveh: http://www.ianandwendy.com/slideshow/Israel/Masada/picture23.htm