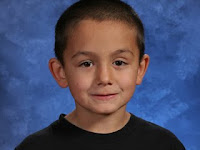 "Mother, Boyfriend Charged in Death of Idaho Boy Found in Canal"
An 8-year-old boy, Robert Manwill, was murdered, allegedly by his mother and her boyfriend. What struck me (other than the question: How can a mother kill her own child?) was a paragraph near the bottom of the page:

This is Charles Manwill's second child to die violently. His former wife, Silke Fatma Manwill, stabbed their 4-year-old son, Michael, in the chest in 1993, killing him. She was sentenced to federal prison after pleading guilty to voluntary manslaughter, and was released in 2002.

That father needs prayer for healing. I can't imagine having one of my children intentionally killed by the other parent, but to then have that repeated sixteen years later with a different child? Unfathomable!
He read a letter to his son at the funeral:

You were a little light in a dark and cruel world. And you were taken from us long before your life on this earth should have ended.

I remember before you were even born, talking to your mom on the phone late at night and she would hold the phone to her belly so I could say good night to our little sunshine. That's the way it was even before we knew that you would be a baby boy.... Continue Reading

God, please heal the pain in this father's heart. May he come to know you, who also had your Son violently murdered, and receive the comfort you long to give him. Lord, have mercy! Christ, have mercy!