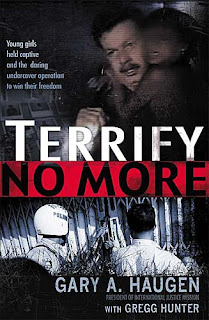 Terrify No More by Gary A. Haugen

Earlier this year, a man representing the International Justice Mission came to speak to my church. I was so fascinated by what he said that I bought all three books written by the president and founder of IJM. I finished the first two in a week or two. Oh that there were more doing what this Christian organization does!

In many places, not just third-world countries, slavery is a scourge that victimises millions of people including little girls who are sold or abducted into prostitution. We would all confess to being outraged that this is happening, but what can we do to stop it? If we find a way to remove the girls from the adults that control them, those adults will simply find more to abuse. The key, then, is to put the abusers out of business and send a message to others that the abuse will not be tolerated. This is what IJM does.

An important part of their work is undercover—operatives going to brothels posing as johns to gather audio and visual proof that particular adults are abusing specific children and itemizing, with proof, what, exactly, those abuses are. It is dangerous work. The operative can’t take equipment with him that makes it obvious what he is doing. If the abusers figure out they’re being cased, the agent will be killed. On the other hand, IJM’s attempts to have abusers arrested, charged and convicted will fall apart if there are any loopholes in their accusations.

Lawyers are needed to understand the law of the country where the abuse is happening, make connections with leaders in the country to obtain their co-operation, and to point out that the country’s own laws are being broken. Sometimes the police and other officials are complicit in and even protecting the abuse or, while innocent, need convincing that it is worthwhile to bring the evil-doers to justice.

Once all the proof and co-operation is obtained, there is the very difficult task of rescuing many girls at once at the same time as ensuring the perpetrators of their abuse can’t run away but are rather arrested. Not only so, but it must be done in a way that protects the girls from harm.

Further, after months or years of being held while smiling (customers want to believe the girls are enjoying their attentions and if the girls don’t look happy, their punishment will be worse than the rape), the girls need a lot of help to return to any semblance of normality and so aftercare must also be found.

Terrify No More is full of stories of how girls wind up in these places, the undercover and behind-the-scenes preparations to rescue them, the glitches and the successes of the actual rescue attempts and of bringing the perpetrators to justice. It is not easy reading but, as the author writes, “any serious contest with evil requires a painful confrontation with the truth. The greatest and most shameful regrets of history are always about the truth we failed to tell, the evil we failed to name. The greatest enemy in our struggle to stop oppression and injustice is always the insidious etiquette of silence.”

Rick Warren is quoted on the back cover: “If you’re tired of living an anemic life and you want to live courageously, get this book. Terrify No More is a suspenseful read that will introduce you to the new heroes of the faith—people who are willing to take risks to bring hope and freedom to those who need it most.” I agree.

Return to Non-fiction Read in 2009