Honouring Mikael Through the Arts

November 09, 2010
Two days after Mikael died, I received the following e-mail from the arts director at church:
"If we (I) can honour your son ANY way thru the arts, please let me know!"

The e-mail was an answer to prayer.  I wrote:


Thank you!  YES!  We need someone artistic to do something and I didn't know who to ask.  Your name came to mind but you don't know me!  So God obviously told you of our need.
We are cremating Mikael so there won't be a coffin but Mikael loved to kayak and what we decided with Nathan is that we are going to put Mikael's ashes in the kayak.  Nathan thought about leaning the kayak against the large cross at the front and somehow securing the kayak so it's safe.  My boys are going to take the kayak to the florist (just so they can see it) so they can make a large arrangement to sit in the kayak sitting area.  That's sort of the idea BUT...
the kayak leaning against the cross isn't necessary (but nice and we have to tell the florist in the morning what we want--the position of the kayak will determine that).  We would love to have someone(s) be creative with some of the things that represent Mikael--definitely his kayak but also, perhaps, other props though we're not sure what.
So, what you could do, if you're willing, is to somehow put these things together for us in some way.
His interests and loves were:
*the outdoors--kayaking, canoing, cycling (even in the winter, in shorts), hiking, snowshoeing, skiing, skating
*he composed sonatas, concertos and other music
*played beautiful oboe
*was writing a novel
*lots of other writing (several blogs)
*intentional misadventures such as exploring abandoned buildings and places he shouldn't have been
*reading (Dante, Alexandre Dumas, Che Guevaro were his favourites)
*gourmet cooking
*he made his own bread, pasta, cheese and even chocolate
*photography--both taking pictures and developing
I'm sleep-deprived and running on fumes--probably will till Sunday--so I'm not thinking too clearly.  If you have any ideas, I'd love to hear them.
Is this something you would be interested in doing?
Thank you so much for your offer.

The flowers got nixed but despite the time crunch, Chandra created a lovely arrangement of those possessions of Mikael's that we brought to the church.  In following posts I want to use the items in the display as a way to talk about my son and share some of who he was.  Below is a photo of the arrangement: 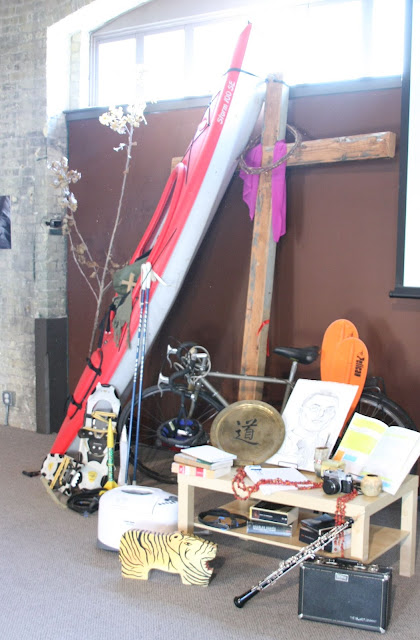 beth mckenna neufeld said…
It was such a beautiful Service, Debbie. Certainly Mikael was honoured wonderfully that day. love from beth
Saturday, May 25, 2013 at 11:55:00 PM CDT