February 21, 2011
Setan Lee was a third-year medical student, only 17 years old, the day the Khmer Rouge took control of Battambang, Cambodia in 1975.  They killed the educated and upper classes and the rest were moved out of the city.  Setan managed to hide his identity and was included with a group of 1000 teens guarded by three young girls with AK49s.  The teens were given three rules:


When some girls began to cry for their moms, the soldiers pulled out their fingernails, poured hot lead on them and then poked out their eyes.  The teens were forced to work 20 hours a day with one small meal and so they would try to find bugs and other things to eat while they were working even though this was forbidden.  One day, the girl working next to Setan found a morsel and quietly tossed it to him.  The female guard saw this and Setan had to watch while his companion was beaten and then smothered to death.  Of the 1000 Setan started out with, only 87 survived the terror of the coming years.

One evening, he was buried alive with only his head above ground.  When he was found alive the next morning, the guards began to beat him to death when suddenly they were stopped and miraculously, Setan was given the job of planning the harvest.  When his university education was discovered, however, he was lined up with others to be killed.  While waiting for his turn, this devout young Buddhist prayed to the "Lord of the Universe" to save his life and when it was his turn to be killed he was spared.

Eventually he was able to escape.  While moving through the jungle, a a naked man appeared from nowhere and pushed him to the ground.  "Do you believe in the Lord of the Universe?" the man asked.  Remembering his prayer and how he had been delivered, he replied that yes, he did believe.  "His name is Jesus Christ," the man continued and then disappeared.

A month later, he made his way across the Thailand border into a refugee camp where he began to associate with Christian missionaries.  One day he saw the man he had met in the jungle and began to learn from him.  Each morning his mentor would teach him Scripture and every afternoon he would go out into the camp to preach what he had heard. He was preaching up to 35,000 people every day before he was able to go to Bible school.

One day the Scripture Setan learned was Galatians 6:1 "Therefore, as we have opportunity, let us do good to all people, especially to those who belong to the family of believers."  He didn't like the part about doing good to all people because that would include his enemies.  That afternoon while he was preaching, he saw the girl who had killed some of his family, smothered his companion in the field and had buried him up to his neck.  The sight of her filled him with rage and he wanted to kill her. 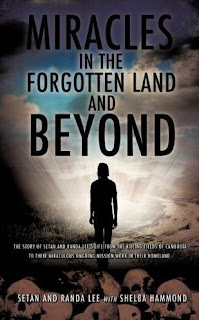 He was in the middle of another verse, Romans 8:35 "Who shall separate us from the love of Christ? Shall trouble or hardship or persecution or famine or nakedness or danger or sword?"  When he got to the word persecution, he couldn't go on.  At that moment, he cried out to God and God took away the anger and replaced it with compassion.  Without finishing his sentence, he walked to where the girl was sitting, kneeled down and forgave her.  Then he went back to preaching.  When he gave the altar call, she was one of those who came running to the front to be saved.

Setan married, immigrated to the US and had children but his heart was for his countrymen back in Cambodia.  Eventually he made his way back and started several churches and a number of ministries, including providing a place of safety for girls and women who escape the prostitution they've been sold into and a school to teach girls skills that would enable them to avoid prostitution.  He even started a Bible school.

Through a series of circumstances, Setan was brought before Pol Pot (the head of the Khmer Rouge)'s right hand man.  When he introduced him to Jesus, the man believed.  Setan says that the UN went to Cambodia to bring peace and brought AIDS instead.  The general came to Jesus and peace began to be restored in the nation.  The best pastors in the nation now are the former Khmer Rouge leaders and soldiers.

Setan and his wife Randa continue to advance the gospel in Cambodia through Women's Ministries, the David Center Orphanage, transforming the village of Kambour and building Cambodia's first Christian university. To learn more of their ministry go here.  Setan and Randa have also written the book Miracles in the Forgotten Land and Beyond, which tells their story and about their work in more detail.

Anonymous said…
What an inspiring and amazing story. I had never heard of Setan Lee. Thank you for "introducing me."
Monday, February 21, 2011 at 3:05:00 PM CST